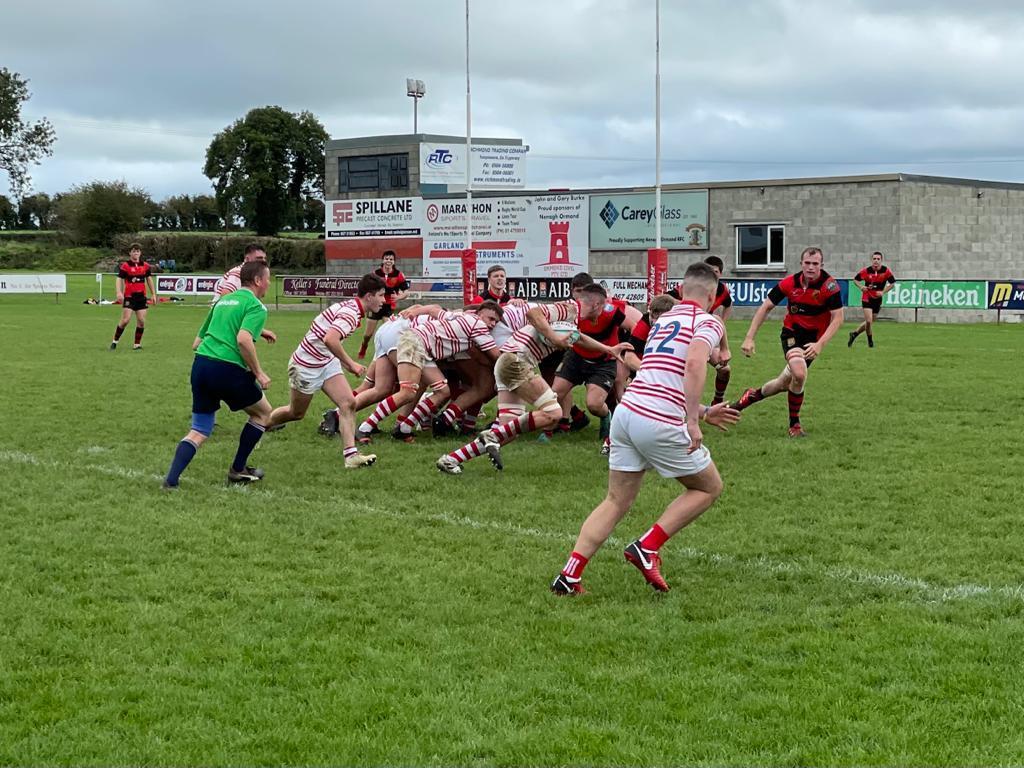 Nenagh Ormond U18.5s welcomed Ennis to New Ormond Park on Sunday for their first home match of the season. These two teams have played many times over the years and were both coming off good wins in the first round so this was set up to be a great contest.

Nenagh started well and had the lion’s share of both possession and territory in the opening period. They put together some great attacking phases but unfortunately were unable to convert all their efforts into points on the scoreboard. Then when Nenagh went on the attack again an intercept sent Ennis’s centre racing towards the home side’s try line. Nenagh worked hard to chase back and Joseph Gleeson put in a huge tackle to prevent the score. Mason Cawley was also on hand to tackle the support and John Brislane was quick on to the ball to win the penalty that got Nenagh out of trouble.

This passage of play brought Ennis into the game and the two teams were very evenly matched for most of the remainder of the half with plenty of opportunities created for both sides, including one difficult missed penalty kick for Ennis.

Nenagh stayed patient and stuck to the plan and were rewarded when they won a penalty in the Ennis 22 just minutes before the break. The referee played advantage and outhalf Gleeson saw the opportunity, put in a lovely grubber kick and touched the ball down for the first try of the game. He then slotted the conversion to put Nenagh ahead 7-0 at half time.

Nenagh stayed going in the second half and when Jack O’Callaghan broke down the left touchline with Mason Cawley in support, a good pass under pressure took Cawley close to the try line. The support was there quickly and the forwards kept it tight until James Simons picked and drove over. Gleeson again converted.

Ennis came back and won another penalty which they kicked but a short time later John Brislane picked off the back of an attacking scrum in the Ennis 22 and made good ground before some excellent handling took the ball all the way out to O’Callaghan for a try in the corner.

At 19-3 the game seemed to be over but Ennis were determined and they brought on some fresh legs which gave them a boost. In the last few minutes the visitors ran in two tries which they converted for a very tight final score of 19-17.

Even though they had won the match and put in a very strong performance, the disappointment of the Nenagh lads after the two Ennis tries showed the standard these lads have set for themselves and no doubt they will stay working hard in training and continue to improve.

Our U18.5s now have next weekend off before travelling to Clanwilliam the following week for the third round of Munster Club competition. Training continues Tuesday & Thursday at 7pm.